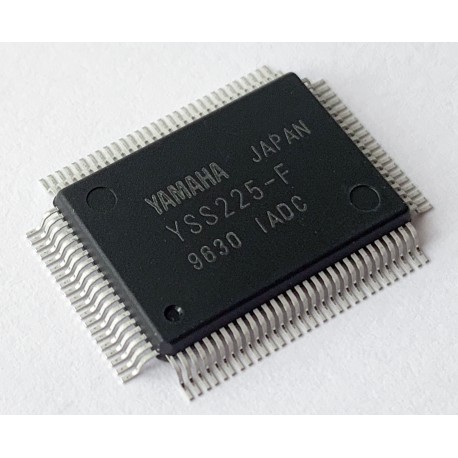 Little is known about Yamaha YSS225-F Effect Processor that was specifically designed for the OPL4 sound chip. A few years ago we bought an old PC system with a Turtle Beach Tropez Plus sound card in it, which contained the effect processor. Strangely enough the YSS225 on this particular sound card is used with an OPL3. However, there are other PC soundcards with the OPL4/YSS225 combination. We tried by studying the hardware to determine the PIN layout of the YSS225. More study of other implementations and probing of the signals is needed to uncover all the secrets. Also, studying and disassembly of the pc sound card drivers can also provide more insight.

We shifted our interest to other projects, that's why we now share our findings, and the chips for those who want to continue to explore the secrets of the YSS225. We still have the Turtle Beach Sound card and the development PC if you are really interested ;)

The Tropez audio drivers can be downloaded for study here: Turtle Beach Tropez Plus Drivers

Our pin layout findings can be downloaded below.

No customer reviews for the moment.